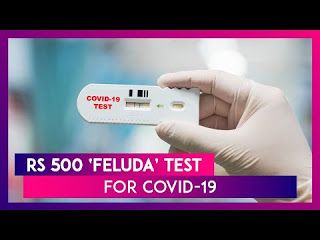 DCGI has launched Feluda corona test an accurate and low-cost paper-based test strip to detect Covid-19. Report of this Feluda test comes out in less than 30 minutes.

This test is developed by a research team led by Debojyoti Chakraborty and Souvik Maiti of the Council of Scientific and Industrial Research (CSIR) and Tata Group.

According to CSIR, the Feluda corona test is very accurate, considered the gold standard in the diagnosis of Covid-19 test. Feluda test has a quicker turnaround time and it requires less expensive equipment.

Feluda is also the world’s first diagnostic test to deploy a specially adapted Cas9 protein to successfully detect the virus.

Full form of Feluda is FNCAS9 Editor Linked Uniform Detection Assay. FNCAS9 is a kind of protein. It uses indigenously developed CRISPR gene-editing technology to identify and target the genetic material of SARS-CoV2, the virus that causes Covid-19.

How feluda test is done?

The testing process is completed roughly in four steps. Viral RNA is extracted from the nasal and throat swab samples collected from a suspected patient.

According to Debjoyi Chakaraborty, the Feluda mix is prepared, containing the Cas9 protein, which can bind to the DNA of the virus. Chemicals are added to the CRISPR complex and to the DNA during amplification process to generate a colorimetric reaction on the paper strip.

In the last step, the paper strip or dipstick is immersed in the Feluda mix. The paper strip generates the test result in the form of two lines for a positive and one line in the case of a negative test, akin to a home pregnancy test. However, this is a nucleic acid test and not a protein based test.

How does Feluda Covid-19 test work?

The Feluda corona test is similar to a pregnancy test strip that will just change colour upon detection of the virus and can be used in a simple pathological lab.

According to Dr Debojyoti Chakraborty, the Cas9 protein is barcoded to interact with the SARS-CoV2 sequence in the patient’s genetic material.

The Cas9-SARS-CoV2 complex is then put on the paper strip, where using two lines (one control, one test) makes it possible to determine if the test sample was infected with Covid-19.

What is the cost of Feluda test?

Antibody tests, which can give results in 20-30 minutes, costs between Rs 500 and Rs 600. Meanwhile, a rapid antigen test kit, which interprets a positive or negative test in 30 minutes, costs Rs 450.

How is FELUDA better than other COVID tests?

The Feluda-CRISPR test does not require the machinery required for a real-time reverse transcription polymerase chain reaction and the skilled manpower required to use it.

Standard PCR machines can be used for the CRISPR test and it is more readily available in labs. “We detect the signal using the CRISPR complex which is highly specific.

It figures out if the viral signature is the SARS-CoV-2 signature, and then binds to it and the read out is in the form of a paper strip, in the form of a band. It takes lesser time than the rRT-PC,” said Chakaraborty.

This Feluda corona test is very accurate. As per the Ministry of Science and Technology, the test kit had a 96% sensitivity and 98% specificity to detect the SARS-CoV-2 virus.

According to Chakaraborty, Tata Group is handling the industrial and commercial operations of the kit and the commercial availability of the kit will be announced soon along with its final market price.

However, given the less complicated process followed to use the kit, it is likely that the kit will be used in field settings soon.

When the Feluda test kit is available to industrial and commercial operations then it could be available online.

Currently, the most used test is the rapid antigen test that gives a positive or negative result in about 30 minutes.

The high-quality test has been developed by the Tata group in collaboration with Indian Council of Medical Research (ICMR) and CSIR-Institute of Genomics and Integrative Biology.

Tata group has become the first in the country to launch an innovative COVID test, which uses novel CRISPR technology to work.

Feluda test is based on which technique?

It uses CRISPR technology to detect the coronavirus.

What is CRISPR technology?

CRISPR, short form for Clustered Regularly Interspaced Short Palindromic Repeats, is a gene editing technology and finds its use in correcting genetic defects and treating and preventing the spread of diseases.

The CRISPR technology can detect specific sequences of DNA within a gene and uses an enzyme functioning as molecular scissors to snip it. It also allows researchers to easily alter DNA sequences and modify gene function.

Moreover, the technology can also be configured for detection of multiple other pathogens in the future.

The United States had granted emergency-use approval of the world’s first CRISPR-based test for Covid-19, developed by Massachusetts Institute of Technology and Harvard University, way back in May.

Also Read: When should I wear PPE kit, N95 Mask and Glove

For a fan of filmmaker Satyajit Ray, Feluda is an exciting name — the detective in his stories and a couple of films. Now, a team of scientists has named its Covid-19 diagonisticc test after the fictional character created by the great filmmaker.

The new Feluda corona test is expected to boost India’s fightback against coronavirus pandemic at a critical time.

Feluda is he detective character name given by Filmmaker Satyajit Ray. Feluda is an exciting name the detective in his stories and a couple of films.

The Feluda corona test kit is similar to a compact paper-strip test used to confirm pregnancy and is much less complex and needs no specific professional expertise to perform.